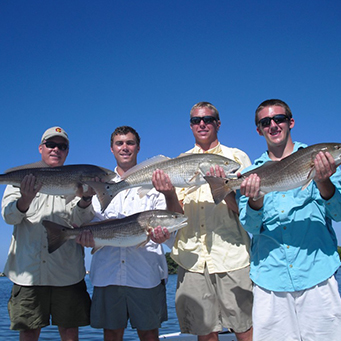 What makes Tampa Bay inshore fishing so good? Well it is the largest estuary in Florida. It’s also extremely fertile with the numerous rivers that run into it. The shorelines especially along the south end have undeveloped shorelines for the juvenile Snook, Redfish, Trout and many other species that roam the flats of Tampa Bay.

What else makes Tampa bay inshore fishing so special? The bay is fed by the beautiful clear tropical Gulf water that seems to help flush the bay. The fertile waters do not become so nutrient rich that it becomes a problem. Another fact that really makes Tampa fishing special, a great plus to the Tampa charter captains, is the abundance of bait.

In no place in Florida, is there any water way that holds the surplus of bait as found in Tampa Bay. Even during the coldest months of the year, a Tampa fishing guide can load his bait wells down with hundreds of sardines to chum and use as bait. The greatest thing that makes Tampa Bay and the flats that surround it so special is the variety and sheer numbers of game fish that you can catch in a single day.

Honestly for Tampa Bay charter captains to head out on the water with a party of 3 or 4 fisherman and catch 50 plus quality game fish on the flats and near the flats is no big deal. In one day of fishing in Tampa Bay a fisherman can catch Snook, Redfish, Tarpon, Trout, Pompano, Jack Crevalle, Grouper, Snapper, Lady Fish, Mackerel, Flounder and sharks from right under the bushes along the shoreline to 500 yards out where the grass flats drop off. With few tangles, clear water, light-tackle or on a fly, whether you seek fish that are 5 pounds or 200 pounds, Tampa Bay fishing is as exciting as it gets.