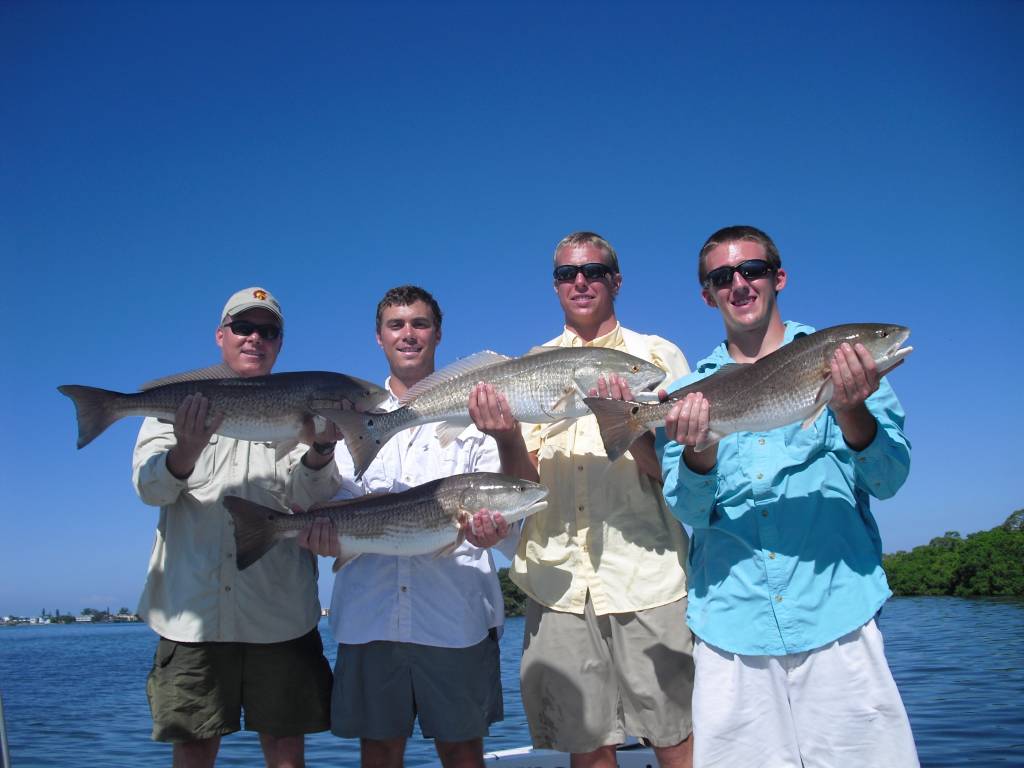 Redfish of Tampa Bay are without a doubt a favorite of local fishing charters. Captain Matt says Snook are probably number one as far as what his flats fishing charters ask for, because there is just a small area in the US to fish for them. Redfish are just as fun to catch, good eating and make for a challenging fight for the charter fisherman. Redfish make a great target for Captain Matt’s Tampa Bay redfishing charters throughout the entire year. Most of the Captain’s Redfish are caught in very shallow water, 3ft or less during the large majority of the year.

During the colder months he likes to target them in deeper water, 4 to 8ft, although they can be caught in very shallow water at that time too. From the very hottest days in August to the very coldest day in January, Redfish are very willing to bite. Most of the Redfish we catch average in the 16 to 34 inch class. The slot limit that can be kept is 18 to 27 inches and stays open year round, which is great for Matt’s Tampa Bay redfishing anglers that are looking to take something home to eat.

A larger majority of the Redfish the Captain’s charters catch are legal size fish. Redfish can travel in large schools made up of hundreds and sometimes thousands of fish. This is one reason they are so fun to target. When you are in them, you can really have some fast action. Sometimes every rod in the boat is bent.

This is one reason Captain Matt carries so much bait on his charters. As long as he keeps chumming and feeding the school, his charters keep catching fish. Many times his fishermen spend hours anchored in two feet of water in one spot hooking fish after fish. This can make for some sore arms, especially when the captain chums up a school of bull reds all over 30 inches. The largest Redfish the captain catches in Tampa and Sarasota Bay will get up over 35 inches and will on rare occasions reach 40 inches plus.

The captain has run into a few offshore schools of bull reds throughout his career. Some of these brown bombers will go over 50 inches and 50 pounds. On a 10 pound test an average size 30 inch plus Redfish can really pull. On the shallow flats they have few places to tangle the line, so they just keep running until the fish tires out. Redfish pull like a bull dog and have a great deal of stamina that can make for a real tug-a-war. A Redfish’s main line of defense is his wariness. Once they are located and the boat is quietly brought into position, they can be easy to fool and hook. For this reason they are a favorite among Matt’s live bait, artificial and fly charters.