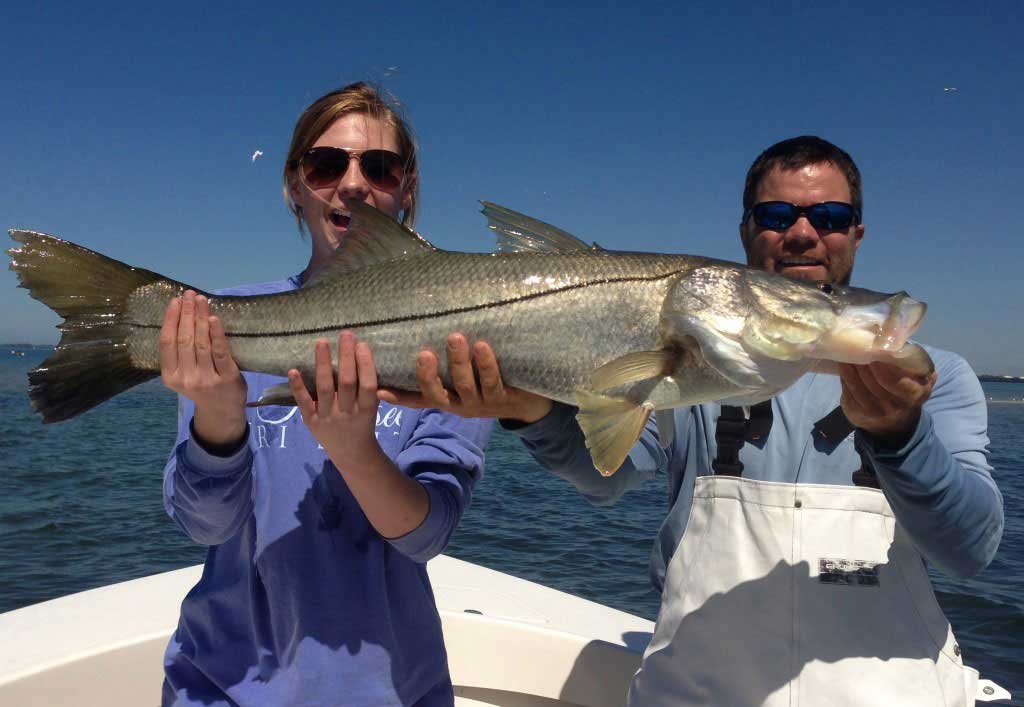 Tampa snook fishing is truly world class. There is a good reason why Captain Matt does more snook fishing charters than any other species of fish. Snook are probably the Bay areas most popular sport fish, and Captain Matt has the very best location to fish for them, literally right out his back door.

Each and every morning that he has a flats charter planned, he heads out to the nearby flats to catch pilchards, the favorite bait fish of the snook. His large powerful bait well is able to hold a thousand pilchards lively all day long which serves a good day of snook fishing. Catching and keeping lots of very lively fresh bait is an absolute must for a successful high volume day of snook catching. Captain Matt’s snook fishing charters regularly catch a high number of snook per outing.

Leaving out of Anna Maria puts Matt’s boat right in the middle of Tampa and Sarasota Bay’s best snook fishing. Due to being the Bay’s lowest density of waterfront development and the fact that the bays largest river, the Manatee, makes the south end of Tampa Bay far superior to the rest of the Bay when it comes to raising and holding a large quantity of snook year round. Just south of the southern tip of Tampa Bay is Sarasota Bay with its entire east shore line almost all left in wild mangroves. It is well known for holding lots of larger trophy size snook. From Matt’s dock he can be fishing either Tampa Bay or Sarasota Bay for snook in less than ten minutes. 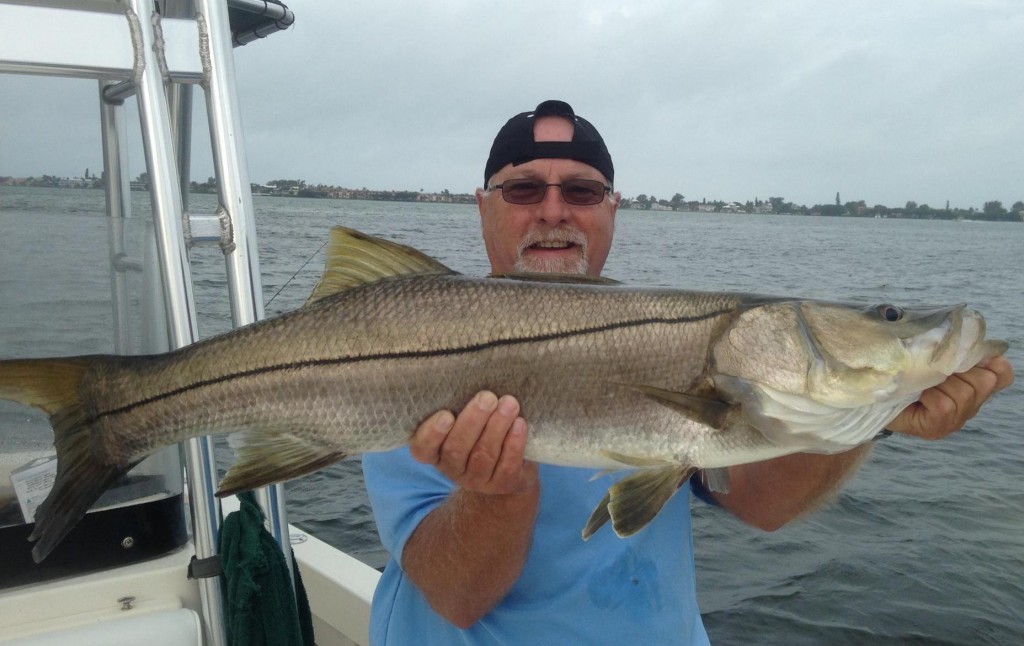 Captain Matt has even caught countless Snook off his own dock as large as 36 inches. He has a few places in Bimi Bay within sight of his home that his fishing charters slay the Snook and Redfish. The south end of Tampa Bay is Matt’s favorite place to take his charters, if numbers of Snook is what they are for. It’s nothing to have a 50 to 70 Snook day in this area. Captain Matt says his average full day Snook charter lands 25 to 50 Snook, his best days as many has a 100, even on the slow days at least 15 Snook. A lot of these Snook average in the 22 to 26 inch class and are great fighters in shallow, clear water on ten pound test tackle. Keeper size is 28 to 33 inches. We do get these fish mixed in with the larger schools of smaller Snook but the Captain has other areas he likes to target for larger Snook as well.

Tampa Bay Snook Fishing
Sarasota Bay is usually the direction that the Captain heads if his clients say they want big snook. Sarasota Bay doesn’t have as many snook as the lower end of Tampa Bay, but they average larger in size. Sarasota boasts many snook in the 30 plus inch class, some have even been upwards of 50 inches. So, leaving from Matt’s dock and heading north targets numbers of snook, head south to target larger snook. Captain Matt’s largest snook, from very shallow water in southern Tampa Bay, measured 44 inches and weighed 30 pounds.

If you are looking for even more of a challenge, Matt caters to fly fishing charters too. Snook are actually the Captain’s most consistent fly fishing targets on the flats. Matt’s fly charters have a lot of days that his clients catch better than 15 or 20 snook in a day. On his best days clients have caught over 50, all on flies and sight fishing in shallow water. Captain Matt has been fly fishing and tying his own flies since he was 12 years old. Many of his snook patterns are his design. He takes a lot of pride watching his customers enjoying success on his own hand tied flies.

Snook fishing is one of the world’s most exciting sports available on the shallow grass flats. Snook are known for their explosive strikes, powerful runs and multiple jumps. Snook are a consistent target almost year round except for the very coldest days. Whether you are a seasoned angler, beginner, or a first time saltwater fisherman, Tampa or Sarasota Bay snook fishing is an exciting challenge for anyone. That is the reason that fishing for snook is so popular among Captain Matt’s charter fisherman. There are few better places to chase theses shallow water gamesters than Tampa Bay.