Tarpon fishing in Tampa Bay may be one of the most thrilling experiences available to an angler in the world. Tampa Bay Tarpon fishing charters without a doubt are what Captain Matt likes the best out of all the different Tampa fishing charters he offers. The Captain’s ability to locate and catch multiple Tarpon in a day is second to none. Captain Matt is a top Tampa Bay tarpon fishing guide and continues to lead the sport with innovative tactics year after year that has brought his stats up to a nearly 100 percent hookup rate per Tarpon charter.

Tarpon fishing is all about preparation, being in the right place at the right time, and using every possible advantage available to bring up your hookup rate. Captain Matt starts with his location. It’s no accident his home is on the water only a few hundred yards from some of the best Tarpon fishing in the world. Matt lives for this stuff. He spends the time and the extra cost it takes to make his Tampa Bay fishing boat an absolute Tarpon battleship. His custom Sheaffer tower boat puts his eyes at 13 ft. off the water so he can see Tarpon at a half mile away. His 225 Suzuki four stroke brings his boat within 100 yards of the Tarpon, quickly and quietly before he switches to electric power.

The Captain switches to his 8 hp trolling motor for his final approach. He has 4 group 31 AGM batteries to power them, which makes it possible for him to travel all day on quiet electric power. He can keep the Tarpon right next to his boat feeding. The Tarpon are unaware that he and his fisherman are a short distance away waiting to sink a hook into them. Everything from the length of his 8 to 13 foot Tarpon rods that vary in size and flex for different application, to the size of the hook and the brand of the fluorocarbon all make a difference in the Captain’s eyes when upping your Tarpon hook up rate.

Tarpon season starts as early as the end of February in warmer years and is usually more consistent by mid March as the water warms. The early season Tarpon are resident fish of Tampa Bay and range from 50 to 200 plus pounds and are actually some of the largest Tarpon in the world. Most of these early season fish are caught around Bay area structures like bridges, rock ledges and rivers around the Bay. Captain Matt takes advantage of the local Tarpon this time of year early in the morning, and then heads to the flats for Snook and Redfish. It’s a great time of year for a combo Tarpon/ flats trip. If the Tarpon are biting well, we might stay on them longer or all day. If the bite ends quickly, then we head earlier for some fast action Snook and Redfish.

May is when the peak season kicks in along with Tarpon fishing fever, from sight fishing to fly fishing for tarpon. North bound Tarpon migrate to the Tampa Bay fishing region invading the beaches and filing into the bay literally by the thousands. This is when and where fishing charters enjoy what may be the world most exiting fishing phenomenon. All the Captain’s tarpon charters are primarily sight fishing this time of year. His charters enjoy the anticipation of the stalk, cast, strike and the hook set that makes site fishing so enjoyable. Many times the Captain and Tarpon charters are stalking up on 100 and sometimes thousands of tarpon rolling on the surface. The anticipation is absolutely electrifying. Tarpon are known as one of the world’s best fighting fish, incredible jumpers, long fast runners and unbelievable stamina. 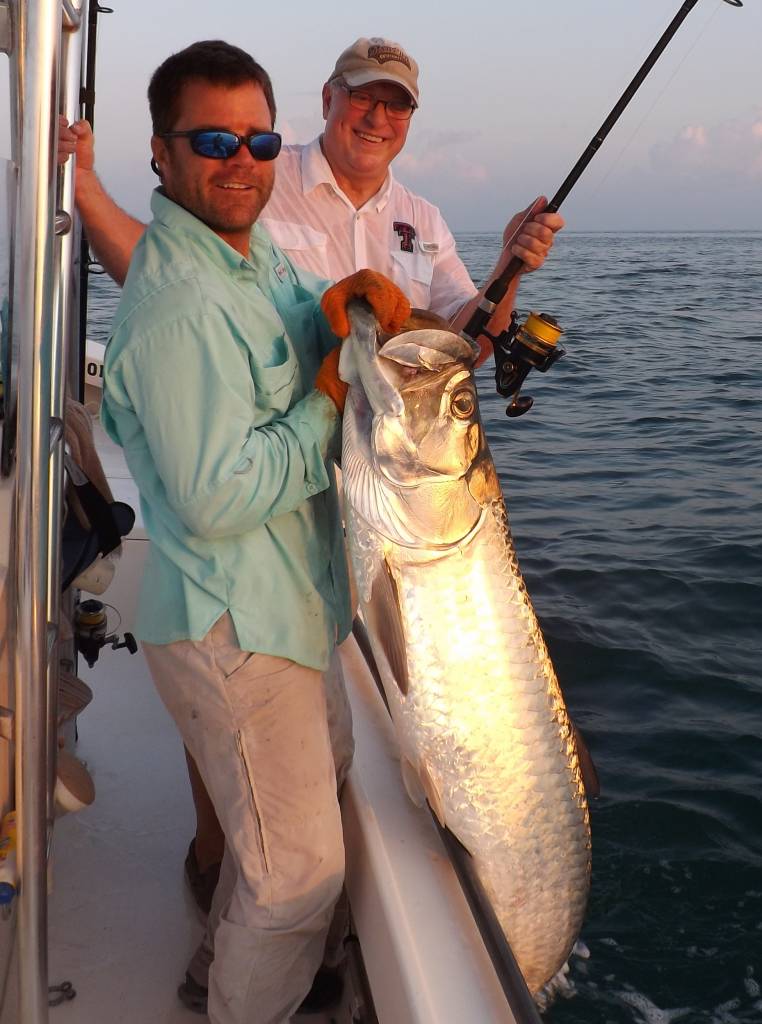 Tampa Bay tarpon fishing means big fish so you will be using the Captain’s 50 pound tackle and even with such heavy gear the fight can and have gone over two hours. The fish average 70 to 140 pounds and go as large 200 pounds and bigger quite often. Although averages are different from year to year, Captain Matt Ercoli has about a 5 to 10 Tarpon hooked up per day on an average full day Tarpon charter May through July.

Even on slow days, he produces 2 to 4 hook ups. On the very best day the Captain’s boat will hook up to 15 to 20 full grown Tarpon on a full day charter. This peak migration, which marks Tampa Bay’s classic Tarpon season, usually runs till about the end of July. Tarpon fishing Tampa Bay from May through July is a time and place every fisherman needs to experience at least once. According to Captain Matt Ercoli it simply doesn’t get any better.

By August most of the Tampa Bay tarpon migration is gone, at this point it is back to the resident fish. The Tarpon fishing is similar to that of the spring around the Bay area structures. There will also be some Tarpon held up in the Back Bays, which makes for some very good Tarpon fishing at times. Some of these fish are resident fish and some are holdovers from the migration.

Late September through the beginning of November Captain Matt will have moments on the beach where he comes across Tarpon migrating south before winter, and it in can make for some very good action. These schools are not as easy to predict though, but it can be very good for a few weeks.

By October most of the resident Tarpon caught will be around the big bridges and in the rivers around Tampa Bay, and this ends by mid November. Of course, although the Captain doesn’t target them, there are a few Tarpon caught in the winter around the Bay area’s power plants. Just ask the Captain and he will tell you when and if it is a good time for a Tampa Bay tarpon fishing charter.